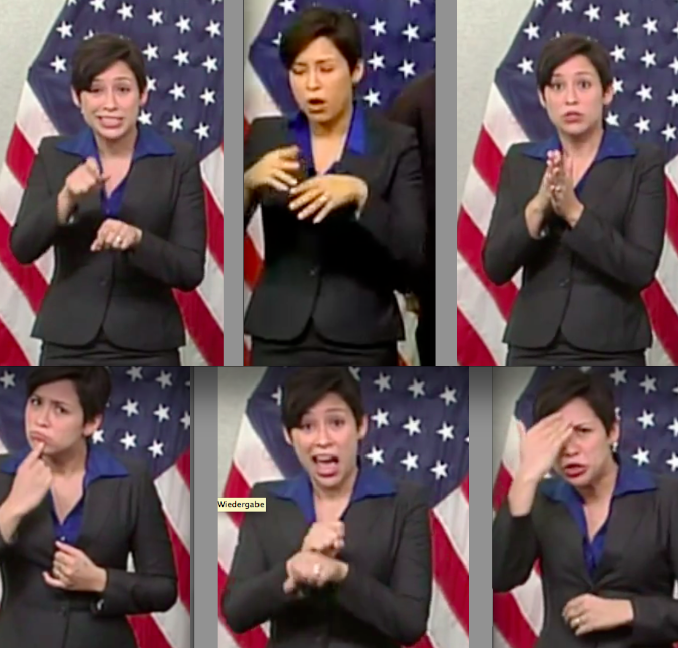 We endorse Lydia Callis for president.

Choosing who should be entrusted to lead the Divided States of America is not a responsibility that should be taken lightly, and never has that maxim been truer than in this current election cycle. The economy is stagnant and the American way of life is threatened by a host of dangers, both foreign and domestic. And so the time has come to decide who is best equipped to lead the country through this era of great crisis and great opportunity. America needs a leader who offers a coherent vision and who appeals to the better angels of Nature. In short, this country needs the best woman for the job.
And so it is without ambivalence or hesitation that we endorse Lydia Callis, sign-language interpreter of NYC Mayor Michael Bloomberg, for president. Her career has probably not been without its mishaps. She has, like all of us at one time or another, definitely made her share of mistakes. But she has her two feet planted firmly on the ground and her dignity, her flexibility and political acumen intact.

Our reasons for putting her on the ballot are:

– She enjoys what she’s doing.
– The modern American man has a weakness for women in powerful positions, and Lydia Callis expertly exploits that weakness.
- She knows that the strongest individuals and leaders are forged through trials by fire and water.
– She’s Mayor Bloomberg’s right and left hand in climate change politics and our hope for a “Green New Deal”.
- She makes bad news bearable.
- It would be such a relief, not to have to listen to all this president’s speeches anymore.
- She’s more attractive than Mr. Obama and Mr. Romney and their wives.

We ask U. S. citizens to keep these points in mind as they enter the voting booth on Election Day.