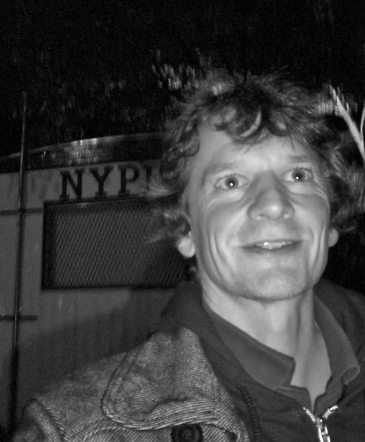 You get to New York in an Airbus A330. When Manhattan rises, it rises like a whale, armoured in steal and glass. You pull the suitcase over the whale’s back. The further you walk into Manhattan, the smaller you get. You walk and walk and get smaller and smaller. A woman stuffs cans into her caddy.
So, here you are, in the United States, you aren’t in a welfare state anymore. What are your chances? In your H&M coat you have cash for some weeks – in case you get robbed and murdered you write your name and birthplace on the back of your hand.

You’re able to speak a dozen stray words and a handful of sentences, thanks to a steady diet of American movies:
Get three coffins ready.
You complete me.
May the Force be with you.
Frankly, my dear, I don’t give a damn.
Go ahead, make my day.
Of course in American movies nobody needs words to understand what’s going on.
So you go to the American Language Communication Center on 36th Street. You enter the classroom.
The teacher introduces you to the class: „This is Chris. Say hello to Chris. Tell us, Chris, when did you arrive in New York?“
„Yesterday.“ They lower their heads to grasp better what you’re saying.
„And already joining us! What are you going to do here?“
„I want to become an American writer.“
„I see“, she says in gentle voice. After five lessons you know enough English for your teacher to trust you on errands to stores one block away. „Get me cigarettes“, she says cordially, „and some Diet Coke for the students.“

But you will become an American writer!
You’ll be the the kind of guy who notices the beauty of light reflecting from a Pabst Blue Ribbon beer can. The kind who sees the whole universe in a grain of Long-Island-sand. Who describes a whole world of everyday suburb miracles. Who taps the readers spiritual sources. Invites them to feel how extraordinary the ordinary is.
You’ll become an American writer, presenting new, exhaustive creations on events of historic importance – written down so simply and vividly that the milk-wagon driver in Kansas City and the drugstore clerk in St. Louis will find it interesting and visionary. The toughest parts you’ll write yourself and farm out the rest of the work to part-timers among the starving nurses and overeducated cab drivers.

„You have an agent?“ Ivana, my English teacher, asks. We run up the East River, progressing fast.
„No.“
„You read a lot?“
„No.“
„I heard writers have to read a lot.“
„Reading books gives me only the polished final product. Concentrating exclusively on the final product won’t show me the way to get there. I want to read The Adventures of Huckleberry Fin, though. Heard good things.“
„And certainly you can do much better than that. You’ve written before?“
„I’ve written advertising for high schools and old people’s homes.“
„How you’re going to do it? How do you break into the whole scene?“
„First I have to write, and then I’ll make them listen. Ivana, we’ve been running together for over two weeks now, and I’m very fond of you, and I’d like us to spend the rest of our lives together.“
„You want to marry me?“
„That’s what I’m saying. Church, vows. Separate bedrooms.“
„You want the Green Card, that’s the whole point.“
„Yes.“
„What about your compañera back home?“
„She knows. She supports me. She understands politics and business.“